admin
Here’s a summary of what you need to know about the Sabah dispute between the Philippines and Malaysia. This is Part 1 of my 3 part series about the conflict over North Borneo.

Part 2: “Untold History of Sabah! Sulu vs. Brunei” (a deep dive into the precolonial and colonial history of the dispute, coming soon!)
Part 3: “The True Owners of Sabah? Philippines vs. Malaysia” (explore the modern-day impacts of the conflict, from WWII to the 2022 French arbitration, coming soon!)

Learn more:
???? "The Philippine Claim to Sabah", in Journal of the Malaysian Branch of the Royal Asiatic Society, by H. G. Tregonning,
???? “The Sabah Claim of Diosdado Macapagal in the Center of Diplomatic Relations with Malaysia and Indonesia” by Stephen L. Macaraeg
????"The Moro Struggle in the Philippines" by Cesar Adib Majul
????"Muslims in the Philippines" by Cesar Adib Majul
???? "Malaysia-Philippine Relations: The Issue of Sabah", in Asian Survey, Paridah Abd. Samad and Darusalam Abu Bakar
???? "The Origin of 'Sabah' and a Reappraisal of Overbeck as Maharajah", in Journal of the Malaysian Branch of the Royal Asiatic Society, by P. J. Rivers
???? “The Philippine Claim on North Borneo: Another Look.” Philippine Studies 36, by Alfredo G. Parpan
???? “THE PHILIPPINE CLAIM TO SABAH AND INTERNATIONAL LAW.” Malaya Law Review 10, by Jayakumar, S.
???? “The Philippines and Sabah Irredenta.” The World Today 24, by Michael Leifer
???? "From Bitter Memories to Heritage-Making? The Jabidah Massacre and the Mindanao Garden of Peace" by Rommel A. Curaming
???? "Muslim Separatism: The Moros of Southern Philippines and the Malays of Southern Thailand" by W. Kadir Che Man
???? "The State-Moro Armed Conflict in the Philippines: Unresolved National Question or Question of Governance" by Rizal Buendia
???? "Sulu and Sabah: A Study of British Policy toward the Philippines and North Borneo from the Late Eighteenth Century" by Nicolas Tarling
???? "Moro Archives: A History of Armed Conflicts in Mindanao and East Asia" by Norodin Alonto Lucman
???? "Revolt in Mindanao: The Rise of Islam in Philippine Politics" by Goerge Thayil
???? "Aristocrats of the Malay Race: A History of the Bangsa Moro in the Philippines" by Nasser A. Marohomsalic
???? "Macapagal, the Sabah Claim and Maphilindo: The Politics of Penetration" by Gerald Sussman
???? ‘Sabah: A Dispute That Refuses to Go Away’ by Anna Malindong-Uy

Kirby Pábalan-Táyag Aráullo is a renowned Filipino Culture Bearer and currently the National Coordinator for Culture and Heritage for NAFCON (National Alliance for Filipino Concerns). He is a Dátû and Lakan by blood, and an Activist at heart. Kirby is a direct descendant of the last Paramount Kings of Luzon (of both Lakandúlâ of Tondo and Rája Matandá of Maynílâ), and of the anti-colonial revolutionary Katipuneros and World War II Guerilyeras who fought for the liberation of the Philippines from colonialism. His upbringing exposed him to the contradicting worlds of traditional politics and grassroots activism.

With a keen interest in varying fields (such as history, government, and human rights) and a strong commitment to serve the community, Kirby studied in some of the world’s most prestigious institutions, such as the University of California, Davis, Harvard University, and Université catholique de Louvain. Kirby is also the Co-Founder of the Bulosan Center for Filipino Studies at UC Davis and author of the groundbreaking book “Black Lives & Brown Freedom: Untold Histories of War, Solidarity, & Genocide.” He is a visiting professor at various colleges in the Philippines and a research fellow with Ágúman Sínúpan Singsing, an institute for indigenous advocacy and the study of Kapampángan language, history, and culture. Kirby is also well-known for his educationally engaging YouTube channel where you can find videos about history, culture, and everything in between!

Dátû Kirby is an educator who is well-rooted in his culture and passionate about his colorful heritage (Kapampángan, Tagálog, Indigenous Áytá, Pangasinan, and Spanish-Basque-Portuguese Mestizo); he strives to decolonize Philippine history and democratize Ethnic Studies through knowledge and creativity. 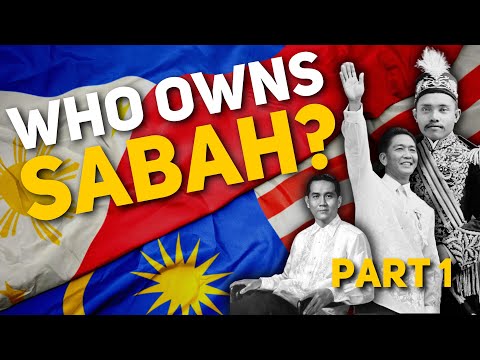 Here’s a summary of what you need to know about the Sabah dispute between the Philippines and Malaysia. This is Part 1 of my 3 part series about the c...