________________________/Research from\______________________
Research from: https://en.wikipedia.org/wiki/Religion_in_China
Religion in China is characterized by a diversity of religious beliefs and practices. In the Mid of 20th century, Communist Party of China (CPC) repressed and destroyed many religious organizations. According to the Census 2022 AD. Shenism (Chinese Folk Religion) is the largest religion in the People's Republic of China with (27.1%) that forms various Folk Traditions Chinese salvationist religions, Chinese shamanism (Wuism), Church of Virtue, Weixinism, Xuanyuanism, Tiandiism and many others etc having the most adherents. The Second largest religion is Buddhism with (17.71%), But a large number of Chinese are those who belongs to No Religion Affiliations/Category with (45.35%) therefore Shenism is Second to it. The Third and Fourth largest religions are Christianity with (6.2%) and Islam with (3.04%) Others remaining includes Hinduism, Bahaism, Manichaeism & many etc. The People's Republic of China is Secular because the majority of the Chinese population is secular. Many Chinese people believe religion should not have a significant role in politics and education. Religion is also primarily considered a personal matter which should not be discussed in public. The Chinese government recognizes no official religion. Other religions have an increasingly growing.
Chinese culture and civilization has been influenced by many religious movements over the past 1,000 years, and Taoism, Buddhism and Confucianism are considered the country's "Three Teachings" based on their cultural and historical impact. China has also seen an interesting syncing of these three religions in the form of a folk religion that is common throughout the country.
Others religions includes Ethnic minorities/Indigenous religions that are Benzhuism, Bimoism, Bon, Dongbaism and many etc.
Now a day, People's Republic of China is the most Non Religious society in the World. but a survey held in early 21st century states that a large number of chinese take part in folk religious ceremonies which also includes a huge CCP members. A survey taken in China showed that 85% of Chinese residents have some religious beliefs, while just 15% consider themselves to be atheists. According to the surveys by Phil Zuckerman published on Adherents.com, 59% of the Chinese population was not religious in 1993, and in 2005 between 8% and 14% was atheist (from over 100 to 180 million).
It is predicted that People's Republic of China can becomes a Christian Nation in the following decades because According to some sources, Christianity could represent as much as 20% of China's population by 2025. Therefore,
Christianity is the fastest growing religion in the People's Republic of China.

_______________/ ???? Disclaimer ???? \____________________________
Copyright:-
Copyright disclaimer under section 107 of the copyright act 1976 allowance is made for “fair use" for purposes such as criticisms, comment, news, reporting, teaching, scholarship, and research. Fair use is permitted by copyright statute that might otherwise be infringing; non-profit educational or personal use tips the balance in favor of fair use.
Music:-
The music I used in this video is from NCS & YouTube library for content creators. 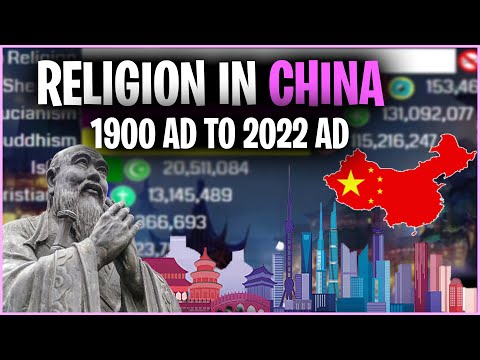