After experiencing a Renaissance masterwork like Tallis’ Lamentations, the listener may wonder at the cruelty of fashion and history which doomed such a great master to oblivion for so long. Until comparatively recently, the expressive power and the incredibly rich contrapuntal art of Thomas Tallis were unknown. Only two short psalm tunes; one of them the basis of Vaughan Williams’ well-known Fantasia on a Theme of Tallis, kept his name alive.

Tallis was born about 1505 in Leicestershire and almost lived out the sixteenth century, dying in 1585. He was an organist as well as a composer; we find him in this capacity at the Abbey of the Holy Cross in Waltham. When Henry VIII dissolved the abbeys, Tallis hoved’ on to join Henry's own Chapel Royal. Here he remained, spanning the reigns of four Tudors, Henry VIII, Edward VI, Mary and Elizabeth. Eventually he became one of the organists of this institution, another one being his colleague William Byrd. Together with Byrd, Tallis was granted a famous monopoly in printing music and music paper in 1575.

Tallis earlier works, written before England broke with Rome, were Latin motets and two Masses, compositions written in the early Renaissance style of masters like Shepherd and Fayrfax. Following the Reformation, he wrote Anglican Service music, most of which has been lost. He continued to write Latin works in his old age, notably the two settings from the Lamentations and a set of 16 motets published in collaboration with Byrd: the Cantiones Sacrae of 1575. They dedicated the volume to Queen Elizabeth who seems to have seen to it that these Catholic composers did not suffer for their faith in those very difficult times. Tallis also left a quantity ofvery fine organ music for the service. A group of part-songs found in keyboard arrangements in the Mulliner Book points to a less austere side of his musical personality.

Tallis set his Penitential motet In Jejunio et Fletu in the darkest sonorities, exploiting the most sombre range of the male voice. The rich sound, the expressive harmonic changes, and the beautiful final cadence are typical of his writing.

The Lamentations, an extended acrostic on the alphabet, are chanted in daily portions during the Office in Holy Week. Tallis made these masterly settings from the first two portions of the text. He has added a title and the final exhortation to Jerusalem. It is curious that he sets the title to music, as well as the Hebrew letters at the head of each section. The latter were customarily set in a florid style; Tallis follows the practice, but also gives each letter its own mood. Aleph is treated broadly, Beth more lightly, Gimel fluently, Daleth briefly and in broken up fashion, and Heth in a restless manner. Like most late Renaissance choral music the Lamentations, written for five parts, achieve a variety of textures, from thick richness to transparency, and alternate imitative polyphony with massive and declamatory homophonic sections. Outstanding is the depth of poignancy expressing the general atmosphere of the text as well as such individual words as amaritudine (bitterness).

Originally titled Missa sine titulo ad quatuor voces inaequales (Mass without name for four unequal voices), this is apparently an earlier composition. Its relative shortness and simpler, chordal style (especially in comparison to the Lamentations) may indicate that it was composed for some especially modest circumstance. The label sine titulo or sine nomine usually meant that the composer had not employed any known melody as the basis of his Mass, or that he had done so but was unwilling to divulge its identity. The latter course seems true of this Mass since all its movements share a similar opening motif. Tallis has maintained the earlier English practice of neglecting to set the Kyrie movement and of making significant cuts in the text of the Credo.

Although composers of this period left no indications that instruments were to participate in choral music, we know that cornets, sackbuts, viols and recorders often took part in English cathedral music on equal footing with the organ. In order to suggest how the Mass may have sounded, this performance adds a “consort” of viols to the men’s voices. These soft and silvery-toned string instruments, which blend beautifully with voices, have been scored for in various ways — one with each voice part, playing all the parts in support of a single voice, and even without the voices (for a brief part of the Et incarnatus est). 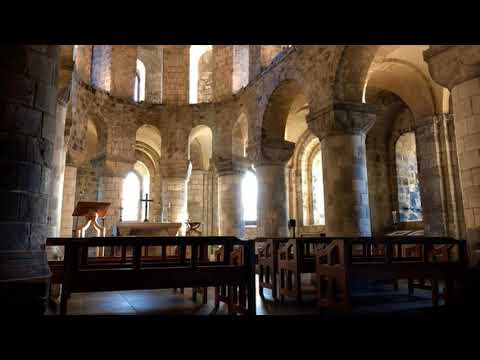