"They missed me.." Assassins Creed

We are going to discuss the new reveals involving Assassin’s Creed Valhalla, including the new and free rogue-lite mode called “Forgotten Saga” set in the Myth World of Niflheim and the formal announcement about the last episode of Eivor’s story, before moving on to all the other 15th year anniversary celebrations including several activities, the announcement of a Special Event in September dedicated to the future of Assassin’s Creed and some potential hints about a remake or a remaster of the original Assassin’s Creed game.

The plot is set in a fictional history of real-world events, taking place primarily during the Third Crusade in the Holy Land in 1191. The player character is a modern-day man named Desmond Miles who, through a machine called the "Animus", relives the genetic memories of his ancestor, Altaïr Ibn-La'Ahad. Through this plot device, details emerge about a millennia-old struggle between two factions: the Assassin Brotherhood (inspired by the real-life Order of Assassins), who fight to preserve peace and free will, and the Templar Order (inspired by the Knights Templar military order), who seek to establish peace through order and control. Both factions fight over powerful artifacts of mysterious origins known as "Pieces of Eden" to gain an advantage over each other. The 12th-century portion of the story follows Altaïr, an Assassin, who embarks on a quest to regain his honor after failing to recover one such artifact from the Templars; he does so by finding and assassinating nine targets across the Holy Land.

Gameplay focuses on using Altaïr's combat, stealth, and parkour abilities to defeat enemies and explore the environment. The game features counter-based hack and slash combat, "social stealth" (the ability to use crowds of people and the environment to hide from enemies), and a large open world comprising various regions of the Holy Land; primarily the cities of Masyaf, Jerusalem, Acre, and Damascus, all of which have been accurately recreated to fit the game's time period. While most of the game takes place within a simulation based on Altaïr's memories, the player will occasionally be forced out of the Animus to play as Desmond in the modern day. Here, they are restricted to a single room they can explore, as Desmond has been kidnapped by a shady corporation who are looking for specific information within Altaïr's memories that will further their own enigmatic goals.

Upon release, Assassin's Creed received generally positive reviews, with critics praising its storytelling, visuals, art design, and originality, although the game was also criticized for the repetitive nature of its gameplay. Assassin's Creed won several awards at E3 in 2006, as well as several end-year awards after its release. The game spawned two spin-offs: Assassin's Creed: Altaïr's Chronicles (2008) and Assassin's Creed: Bloodlines (2009), which exclude the modern-day aspect and focus entirely on Altaïr. A direct sequel, Assassin's Creed II, was released in November 2009. The sequel continues the modern-day narrative following Desmond, but introduces a new storyline set during the Italian Renaissance in the late 15th century, and a new protagonist, Ezio Auditore da Firenze. Since the release and success of Assassin's Creed II, subsequent games have been released, with various other Assassins and time periods.

Assassin's Creed is an action-adventure game set in an open world environment and played from a third-person perspective in which the player primarily assumes the role of Altaïr, as experienced by protagonist Desmond Miles. The primary goal of the game is to carry out a series of assassinations ordered by Al Mualim, the leader of the Assassins. To achieve this goal, the player must travel from the Brotherhood's headquarters in Masyaf, across the terrain of the Holy Land.

"They missed me.." Assassins Creed 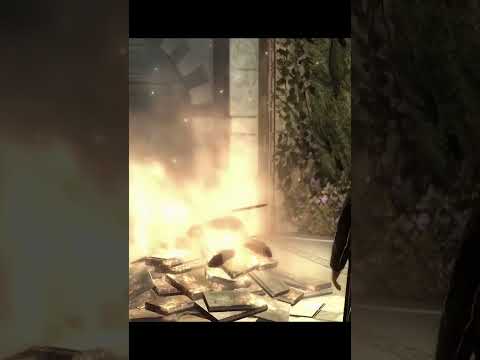