admin
In this new episode of #EUHistoryExplained, Giulia Bonacquisti, Project Manager at the Trans European Policy Studies Association (TEPSA), takes a look at the role the United States played in the history of European integration.

In this video, we take a look back over decades of European integration, highlighting key moments where US involvement was, or was not, a crucial impetus for further integration, and analysing the changing attitudes of the US government towards the European project over the years. We can distinguish two main phases in the US’ attitude towards European integration: a first phase, from the end of World War II to the end of the 1960s, marked by a strong support; and a second phase, starting from the Nixon administration, where increasing economic and political competition from the European Economic Community resulted in a more ambivalent US attitude. This video, the first of two parts dealing with US influence on European integration, deals with the first phase, in the early years of the European project.

EU History Explained is TEPSA's video series exploring the origins of the modern EU. If you have ever wondered how the European Union of today came to be, or what lies behind the talk of politics being shaped in 'Brussels', then this is the series for you! 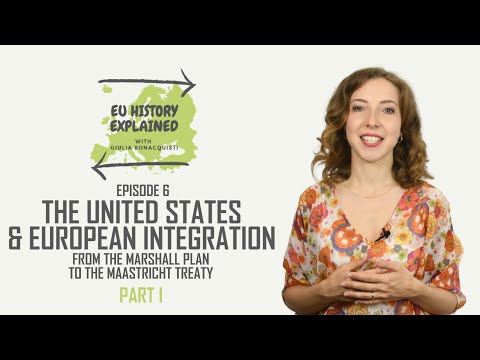