admin
What about Slovakia during World War II? Before WWII Slovakia was part of Czechoslovakia. As the Germans took control of the Czech lands and renamed these the Protectorate of Bohemia and Moravia was established. Slovakia became 'independent' as the Slovak Republic (Slovenská republika) which was a German puppet state. It was also known as the Slovak State. This state was led by the Hlinka’s Slovak People’s Party (Slovenská ľudová strana, HSĽS) ruled by Monsignor Jozef Tiso. Later they sent the Slovak Expeditionary Army Group to the Eastern Front. The Slovak National Uprising occured in 1944 where a part of the Slovak armed forces rebelled against the Slovak authoritarian government. The Germans then invaded and crushed the rebellion. The Soviet army 'liberated' the country and its capital Bratislava in April 1945. What about Slovakia in WW2?
History Hustle presents: Slovakia during World War II (1939 – 1945) – The Slovak Republic of Jozef Tiso.

VIDEO
Video material from:
https://www.youtube.com/watch?v=RgSAILLFUU8&t=258s
Slovakian Axis 1939-1945 (2)
"Copyright Disclaimer Under Section 107 of the Copyright Act 1976, allowance is made for "fair use" for purposes such as criticism, comment, news reporting, teaching, scholarship, and research. Fair use is a use permitted by copyright statute that might otherwise be infringing. Non-profit, educational or personal use tips the balance in favor of fair use."

Questions? Send me an email at: [email protected] 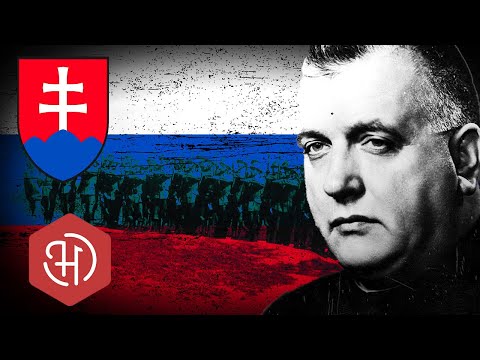 What about Slovakia during World War II? Before WWII Slovakia was part of Czechoslovakia. As the Germans took control of the Czech lands and renamed t...