Among the Mazatecs, the sacred mushroom, or ndi xijtho (‘little one that sprouts’) as it is known in Mazatec communities, is a sentient being that has a personality, intentions, and a voice of its own. During evening ceremonies with these beings, the Mazatecs together with the Chjines (“sages”) enter an altered state of consciousness that also implies an exercise in heteroglossia or polyphony involving mushrooms and other extra-human beings brought together in front of the altar. This presentation will address some examples of the political agency of sacred mushrooms, including relationships between the Mazatec and extra-human beings, as well the way mushrooms act as an embodied territory that has been violated in the name of science for the last 55 years, but that can regain strength with the psychedelic renaissance., Psychedelics and plant medicines do not exist in a cultural and ideological vacuum; the unfolding of experiences and their outcomes are thoroughly shaped by individual and cultural expectations and the underlying narratives —the stories that we tell about them, what they are and what they are for. Plant medicines such as ayahuasca or peyote, used by traditional and indigenous peo-ple, have been historically enveloped by the eco-social narratives of their mythologies, ontologies and epistemologies, which structure and support the healthy integration of those experiences within a tightly-woven communal and relational setting. Most Western psychedelic users, howev-er, often lack shared, coherent and structured means of sense-making, while also often lacking a meaningful sense of community, which is indispensable for integration, and a crucial protective factor against predatory ideological memes and personality cults. The epistemic and ontological background of many Western psychedelic users is often an ad-hoc collage made of cherry-picked aspects of indigenous ontologies, New Age spiritual tropes and cliches, selectively com-modified and re-packaged bits of eastern spirituality, esotericism or quantum theory and a strong emphasis on conspiracy fantasy, such as the often recycled anti-semitic tropes of global-ist domination, all pieced together by the markets of spiritual consumerism and subservient to the hyper-individualistic ethos of modern neoliberal spiritual subjectivities and their glorification of the self. In this panel, we will discuss and unravel some of the risks inherent in this potent and potentially dangerous concoction of “Conspirituality”, opening a door for better collective sense-making efforts, the adoption and promotion of better critical thinking skills within psychedelic spaces and better education in relation to the systems of knowledge and values of relevant in-digenous groups.

Sarai Piña Alcántara holds a Bachelor’s degree in Ethnology from the National School of Anthropology and History (ENAH), where her thesis committee recognized her work with an honorable mention and a recommendation for publication. She is currently a master’s student at the Center for Research and Advanced Studies in Social Anthropology (CIESAS) in Mexico City. She has worked in the Sierra Mazateca for sixteen years on topics including traditional shamanism, tourism and neo-shamanism, medical anthropology and cultural consumption. She has also carried out applied research in the region with local collectives. She has given lectures nationally and internationally on the phenomenon of neo-shamanic tourism. She is currently carrying out research on the transnationalization and legalization of psilocybin in Mexico and the United States. 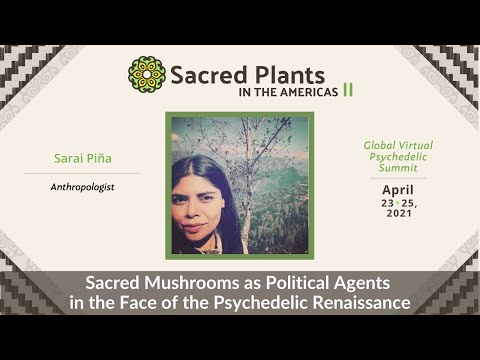 Sacred Plants in the Americas II April 23, 24 and 25, 2021 Speakers: Sarai Piña (Translated by Adam Aronovich) Among the Mazatecs, the sacred mushroom...