admin
Josias, Prince of Waldeck and Pyrmont - Hitler's Royal in Nazi Germany - Buchenwald - Holocaust - WW2. Josias, Prince of Waldeck and Pyrmont was born on the 13th of May 1896 at the ruling family's castle in Arolsen, then part of the German Empire. He was the eldest son and heir of Prince Friedrich, the last ruler of Principality of Waldeck and Pyrmont which was a constituent state of the German Empire, and Princess Bathildis. The First World War began on the 28th of July 1914. Waldeck enlisted in the German Army as a cadet of the infantry regiment and suffered serious injuries after being wounded in action multiple times.
The First World War ended on the 11th of November 1918 when the German leaders signed the armistice in the Compiègne Forest in France. Josias’s family lost their Principality of Waldeck and Pyrmont as it became the Free State of Waldeck-Pyrmont within the Weimar Republic which was the government of Germany from 1918 to 1933. In 1919 Josias Waldeck was discharged from the army and fought as a Freikorps officer in Upper Silesia. In the aftermath of World War I and during the German Revolution of 1918–19, Freikorps consisting largely of World War I veterans, were raised as paramilitary militias. They were ostensibly mustered to fight on behalf of the government against the Communists attempting to overthrow the Weimar Republic. However, many Freikorps also largely despised the new Weimar Republic and were involved in assassinations of its supporters.
On the 1st of November 1929, Josias Waldeck joined the Nazi Party and in March 1930 he joined the SS. He was immediately appointed adjutant to Sepp Dietrich, a leading member of the SS, before becoming Heinrich Himmler's Adjutant and staff chief in September 1930. Adolf Hitler and the Nazi party came into power in January 1933 and Josias was elected as the member of the Reichstag - the German parliament. The same year he was promoted to the rank of SS Lieutenant General.
In 1934, Waldeck participated in the Night of the Long Knives which was the murder of the leadership of the SA – the Storm Troopers - which was the Nazi paramilitary formation led by Ernst Röhm, a longtime friend of Adolf Hitler.
The murders took place between the 30th of June and the 2nd of July 1934 and the SS also murdered several conservative critics of the Nazi regime including Hitler’s predecessor as Chancellor, General Kurt von Schleicher.
In October 1938, Waldeck, who remained loyal to the Nazi regime until its very end, had been promoted again to the Higher SS and Police Leader for Weimar. In this position he had supervisory authority over Buchenwald concentration camp.
Established in July 1937, Buchenwald was one of the largest concentration camps established within German borders.
In 1941, when Buchenwald had first caught the attention of Josias Waldeck, the camp's commandant was Karl-Otto Koch.
Waldeck, when glancing over the camp's death list, came across the name of Walter Krämer, a head hospital orderly at Buchenwald whom Waldeck recognized because Krämer had successfully treated him in the past.
Waldeck investigated the case and discovered that Karl-Otto Koch had ordered both Krämer and Karl Peix, a hospital attendant, killed as "political prisoners" because they had treated him for syphilis.
Throughout the investigation, more of Koch's orders to kill prisoners at the camp were revealed, as well as evidence of embezzlement of possessions stolen from prisoners.
When it was revealed that the Kochs had used the massive Nazi apparatus to gain an enormous amount of wealth, their downfall became inevitable as all the possessions stolen from murdered Jews was regarded as the property of the Reich.
While Ilse was acquitted for lack of evidence, Karl-Otto Koch was executed by firing squad on 5th of April 1945.
Waldeck himself was then arrested by American forces on the 13th of April 1945.
On the 14th of August 1947, the US military tribunal sentenced Waldeck to life imprisonment. However, this sentence was reduced to 20 years and in November 1950, after serving only 3 years, Waldeck was released from the Landsberg prison for health reasons.
Josias, Prince of Waldeck and Pyrmont died at the age of 71 on the 30th of November 1967 at Schaumburg Castle.

Disclaimer: All opinions and comments below are from members of the public and do not reflect the views of World History channel.
We do not accept promoting violence or hatred against individuals or groups based on attributes such as: race, nationality, religion, sex, gender, sexual orientation. World History has right to review the comments and delete them if they are deemed inappropriate. 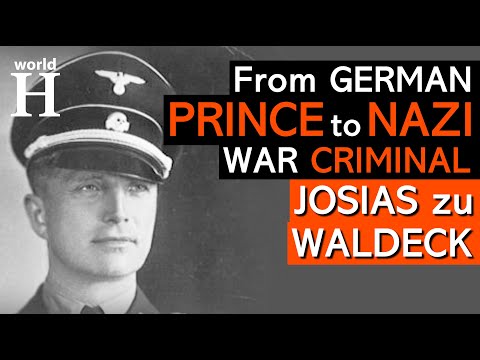