Musical show ‘Farewell Beitou 2.0 Revival’ to hit the stage once again in December

admin
"Farewell Beitou" is a musical produced by the Greenray Theatre that has been thrilling audiences since 2018. The musical is set in north Taipei in the 1960s, inspired by a hot spring hotel in the area. The newest edition of "Farewell Beitou" will be hitting the stage again in Taipei in December. FTV reporter Stephany Yang takes us in for a sneak peek.

"Farewell Beitou" tells a story set in the 1960s, written by acclaimed director Wu Nien-jen and award-winning songwriter Chen Ming-chang. The story was greatly inspired by a hot spring hotel in Chen’s childhood, and many of Chen’s signature song pieces are integrated into the plot.

Chen Ming-chang
Music Director
This is a story that everyone can enjoy. It is a story about Taiwan. Perhaps it can be turned into a repertory theatre piece in the future, where it can be performed for generations, and even showcased all over the world.

Wang Chun-chieh
Conductor
In fact, Nakasi music is a very important element in “Farewell Beitou.” I personally think Nakasi can be likened to Taiwanese jazz because both Nakasi and jazz are performed in clubs. Although in Taiwan, it is performed in bars, it is similar.

The newest edition of “Farewell Beitou,” titled "Farewell Beitou 2.0 Revival," has been upgraded in many areas, spanning from its music and script to stage effects. The cast has also welcomed a few new faces. One new cast member is actor Fang Wen-lin. She will be playing one of the main characters, Ai-jiao, previously played by Lotus Wang.

Fang Wen-lin
Actor
The place where I lived when I was young was very close to Beitou, so I am very familiar with this place. Honestly, the first time I read the script, I was very stressed because I am new to stage play.

Lin Yu-hsuan
Actor
I did a tour of Beitou, and then walked around the whole Beitou. I visisted bars and learned about the history of Beitou. I discovered that the scenes in our play, the scene of the wooden house, really seemed to have been moved directly from Beitou to the stage.

The show hopes to allow the audience to learn more about Beitou’s history. "Farewell Beitou 2.0 Revival" will be on show at the Taipei Performing Arts Center from Dec. 3 to Dec. 11.

Musical show ‘Farewell Beitou 2.0 Revival’ to hit the stage once again in December 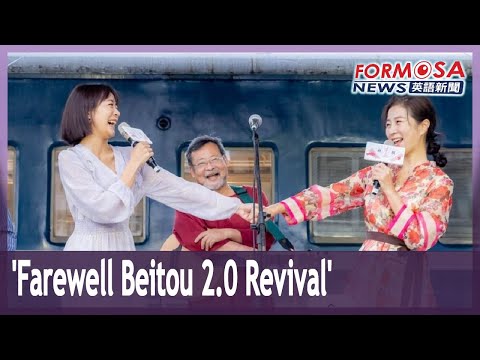 "Farewell Beitou" is a musical produced by the Greenray Theatre that has been thrilling audiences since 2018. The musical is set in north Ta...