admin
In the summer of 1942, the British 8th Army was in a crisis. After being defeated at the Battle of Gazala, Erwin Rommel’s Panzer Army Africa had them on the run. If the rout could not be stopped soon, then the Suez Canal could be under threat.

The British theatre commander Claude Auchinleck decided to take command for himself. But instead of falling back to established defensive lines at Mersa Matruh, he moved 8th Army to a new line near a small railway halt called El Alamein flanked by a feature called the Qattara depression. Thanks in part to the bottleneck, they were finally able to halt the German advance during the First Battle of El Alamein. As both sides licked their wounds, the Allies began to plan their inevitable counter-attack.

The coming battle would become one of the most famous of the Second World War, an old-school infantry slog through deadly minefields more akin to the First World War than the Second. A battle which would prove the tide of the war had truly turned in the Allies' favour. This is the story of the Second Battle of El Alamein.

Correction - 02:32 - Montgomery was a Lieutenant General at the time of Alamein

A short guide to the desert war: https://www.iwm.org.uk/history/a-short-guide-to-the-war-in-africa-during-the-second-world-war

How the Allies won the war in North Africa: https://www.iwm.org.uk/history/how-the-british-secured-a-victory-in-the-desert-during-the-second-world-war

Licence the clips used in this film: https://film.iwmcollections.org.uk/mycollections/index/2768 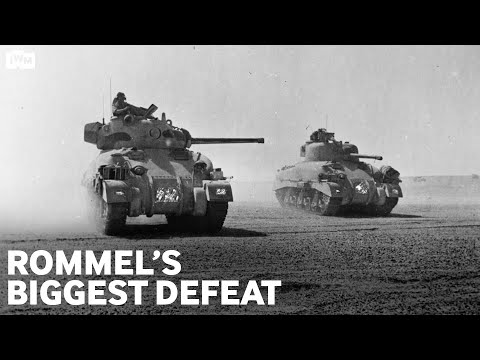 In the summer of 1942, the British 8th Army was in a crisis. After being defeated at the Battle of Gazala, Erwin Rommel’s Panzer Army Africa had them ...