admin
Heinrich Schreirer - Brutal Nazi Guard in Auschwitz Concentration Camp - Nazi Germany - Holocaust.
Heinrich Schreirer was born on 11th June 1923 in Romania and his father was of German descent. He claimed he joined the Luftwaffe in October 1941 and served in Romania and Norway. The truth was that he was sent to Auschwitz concentration camp in November 1942 where he remained until mid-1943. After Heinrich Schreirer was captured in Bergen Belsen concentration camp, he was tried at the Belsen trials and convicted of atrocities which occurred during his stay at Auschwitz. He pleaded not guilty to the charges brought against him and denied everything – crimes he had committed, membership in the SS and ever being in Auschwitz. However, he was identified by the holocaust survivors and his lies did not help him escape justice.
On November 17, 1945 when a tribunal sentenced Schreirer to 15 years imprisonment, he was 22 years old. However, his imprisonment ended on September 3, 1950 when he was released from prison. Nothing more is known about his later life.

Disclaimer: All opinions and comments below are from members of the public and do not reflect the views of World History channel.
We do not accept promoting violence or hatred against individuals or groups based on attributes such as: race, nationality, religion, sex, gender, sexual orientation. World History has right to review the comments and delete them if they are deemed inappropriate. 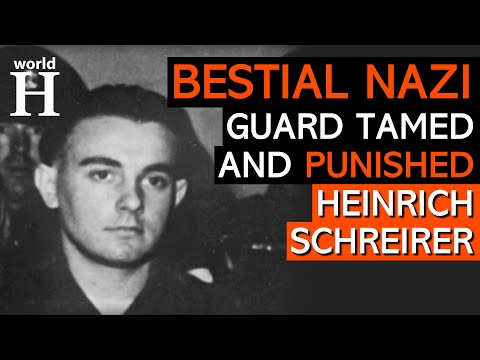