European history will be written in Ukraine! Let us be united against Putin! Terry Reintke debates

admin
Terry Reintke (Verts/ALE). – Mr President, dear colleagues, dear Commissioner, dear Minister, the President is right – European history will be written in Ukraine. That is why our support for a free European democracy against brutal Russian aggression is paramount right now. It is our historic responsibility to do everything possible to show this solidarity, including hard and far—reaching sanctions, and I’m happy to hear that a deal has been reached on a ban on Russian oil. It is an important next step, but it is certainly not the last one that we will need.

While this parliament strongly supports the sanctions, we also already see the negative consequences this war has for Europe. After years of pandemic, we see the economic struggle of many households in the European Union. And our reaction to the pandemic, despite some challenges in the beginning, was based on one of our strongest assets – solidarity.

With the Next Generation EU fund we managed to show that we can stand together in times of crisis, and the same – and probably more – is needed now because we all know what Putin is trying to do. He’s trying to divide us, to play Member State against Member States and to count that the social hardship that we will face will dry out our firm support for Ukraine. Putin is trying to divide Europe, to divide our societies. He is counting on our inability to manage this great challenge together.

We cannot colleagues, and we will not, let him succeed in this. Let us show that we will face this challenge together, the east and the west of Europe, the north and the south. Let us show that all that he is succeeding in will be to revive the European social model, the promise of a European Union where nobody will be left behind. For that, we will need joint efforts, investments, a solidarity fund to balance out the social inequality. And we will have to proceed in creating a real social safety net on the European level by finally introducing a European minimum wage, closing the gender pay gap and, yes, also a European minimum income.

#eudebates the unique initiative aiming to promote debate, dialogue, knowledge, participation and communication among citizens. #Ukraine #Russia #Energy #Putin #Embargo #sanctions #Putin #OIL #Rubles
Embargo on Russian oil and its derivatives. It is the proposal that the president of the European Commission, Ursula von der Leyen, presented to the European Parliament this Wednesday, without providing details on an issue that has been delaying the expansion of sanctions: how to solve the veto of countries such as Hungary and Slovakia , perhaps through exceptions that have not yet been officially announced. This Wednesday the 27 ambassadors to the EU will meet to discuss the sanctions package before its final approval by the governments.

“Today we are presenting the sixth package of sanctions”, said Von der Leyen before the plenary session in Strasbourg: “First of all, we will make a list of high-ranking military officers and other people who committed war crimes in Bucha and who are responsible for the inhuman siege of the city of Mariupol. This sends another important signal to all the perpetrators of the Kremlin war: we know who they are and they will be held accountable.”

“Secondly”, he continued, “we removed Sberbank, by far the largest bank in Russia, 37% of the sector, and two other major banks from the SWIFT system. With that, we hit banks that are systemically critical to the Russian financial system and Putin’s ability to undertake the war effort. This will cement the complete isolation of the Russian financial sector from the global system.”

“Third”, added the head of the Community Executive, “we are vetoing three large Russian state chains from our waves. They will no longer be allowed to distribute their content in the EU, in any format, be it via cable, via satellite, the Internet or mobile phone applications. We have identified these television channels as mouthpieces, aggressively amplifying the lies and propaganda of [Vladímir] Putin [presidente ruso]. We must not let them spread these lies. In addition, the Kremlin has consultants and advisers in Europe. And this will now end. We are prohibiting those services from being provided to Russian companies.”

European history will be written in Ukraine! Let us be united against Putin! Terry Reintke debates 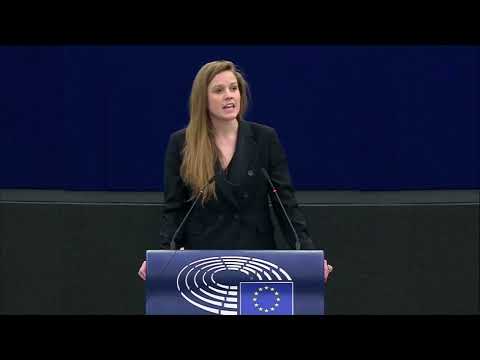