admin
The Northern Alberta Sports Car Club, celebrating 65 years of bringing Motorsports to Northern Alberta, is proud to present the SPEEDWAY PARK REVIVAL; a
celebration of Motorsports History focused on the cars that raced at the Edmonton International Speedway Park from 1968 to 1982.
The Northern Alberta Sports Car Club has been involved in bringing motorsport to the Edmonton area
for 65 years; the organizing club for CAN-AM, TRANS-AM, Formula Atlantic, Formula 500, Tommy Fox Classic, the INDY-Car events held at Edmonton Municipal Airport, Ice Racing with Bobby Unser and many other historic motorsport events.

August 20th
- Speedway Park Revival Car Show and 65th NASCC Anniversary Banquet:
A unique car show format focusing on motorsport and historic race cars that competed in CAN-AM,
TRANS-AM, Formula Atlantic, NHRA, and local club events. This is an opportunity for the public to view cars that are normally secreted away in private collections. How many people have seen a 1968 McLaren M6B, or a 1974 Maki F1 car? How about a 1970 Ferrari 512S? This is an opportunity to see these cars up close, you may even see them racing on the RAD
Torque Raceway road course.
A banquet will be held to celebrate the Northern Alberta Sports Car Club’s 65th Anniversary.

Do you have a race car sitting in your garage collecting dust? This is your opportunity to bring it out and show us what you have, with a chance of doing a lap or two on the road course.
August 20th & 21st
- NASCC and RiverCity Motors Sponsored Vintage/ Historic and Sports Car Races. 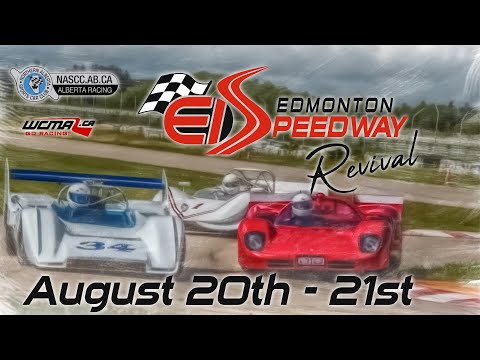