admin
Christopher Marlowe's "Doctor Faustus" was first published in 1604. It depicts the life of Faustus who sold his soul to Lucifer for 24 years of magical powers. It is a morality play. In the prologue of the text, the chorus gives us insights what we will read in the play, chorus talks about the necromancy and how much it delights Faustus. Chorus talks about the subject of the play as based on an ordinary man not on king, or warriors and mentions Faustus' humble background and place of upbringing.

Chorus is found in the Greek tragedies, it is a group is people who comment on the plot of the play from the perspective of the audience. But here Marlowe has made it only one person.


I am Nadeem Khan. I am an assistant professor English, I have qualified NET and JRF English. I have been teaching English Literature and Language for more than 6 years.


I have been the gold medalist????of school, and university. I have pursued BA (H) ENGLISH from University of Delhi. And I have a Master's degree in English.


The channel will provide sufficient material for the literature scholars all around the world.


1. One on one classes - You get a personal teacher and a customised module to remove your weaknesses.


4. Choose your own timings.


5. Visible Improvement in just one month. 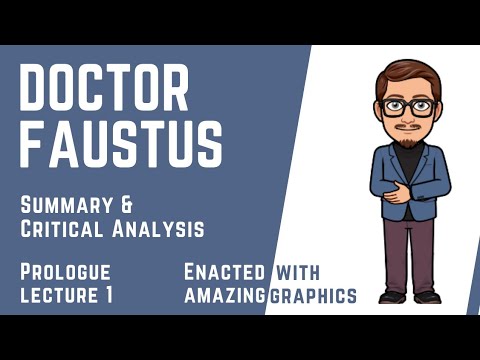 Christopher Marlowe's "Doctor Faustus" was first published in 1604. It depicts the life of Faustus who sold his soul to Lucifer for 24 years...