admin
The city of Hatton is considered the “Tea Capital” of Sri Lanka. It is in the heart of major tea producing areas in the country, Dickoya and Dimbula planting districts. Hatton has an important railway station and was the major station from where made tea was transported to Colombo by rail. Unfortunately, due to some reason, transport of tea by rail has become 'history' as teas are now sent to Colombo only by road. Hatton is the city linking Talawakelle, Bogawantalawa, Upcot and Maskeliya areas comprising hundreds of major tea plantations in the country. Hatton has the shortest distance by road from Colombo to the Hill Country.
The name 'Hatton' has an interesting story behind it. When a medium-sized tea plantation was initiated here during the British era, the planter at the time had the habit of leaving his hat on his walking stick in the tea field. He then went about with other work, but the field workers used to be deceived that their boss was somewhere around, making them continue their work un-supervised. Thus it is said the name evolved from 'Hat On', and interestingly, its name in Tamil “Thoppi Thotam”, translates into 'Hat Estate', Thoppi means Hat and Thottam means Estate!
The city of Hatton can be easily located from a distance as it lies under a mountain known as Duke Nose. The story behind it is that an estate worker while going around with his master, commented that the mountain looked like a nose. His master too agreed and had remarked that it really looked like the nose of a “Duke” in England, and it is not clear which 'duke' he had referred to! To me, it looked like that of the Duke of Edinburgh, and hope he will not take offence to my thought! A huge water tank is located on this mountain, which supplies water to the entire city, literally making the 'nose' ready with a stock of portable water! In this episode, let me take to the tea processing center called Dickoya.
This is the first tea processing centre we come across on the Hatton-Bogawantalawa-Maskeliya highway, located in a prominent place by the road-side, about 3.2 km from Hatton Railway Station. Dickoya Estate is situated 1254.5 metres above sea level. 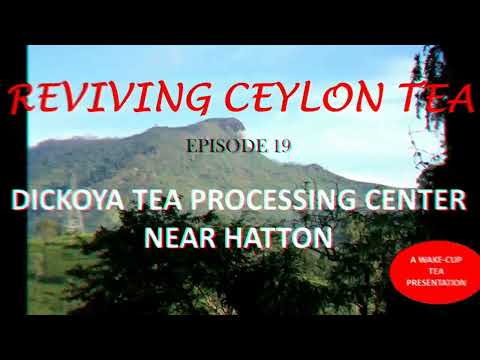 The city of Hatton is considered the “Tea Capital” of Sri Lanka. It is in the heart of major tea producing areas in the country, Dickoya and Dimbula p...