admin
Anton Lechner - Nazi Guard at Auschwitz Concentration Camp - Holocaust - Nazi Germany - World War 2. December 22, 1947, Krakow, Poland. Anton Lechner was born on the 18th of November 1907 and he was a Sudeten German which was a name for ethnic Germans living in Czechoslovakia.
In 1933 Adolf Hitler and his Nazi Party came into power. One of the reasons was that many Germans could not concede their country’s defeat in World War I, arguing that “backstabbing” and weakness in the rear had paralyzed and, eventually, caused the front to collapse. The Jews, they claimed, had done much to spread defeatism and thus destroy the German army. They interpreted the terms of the Versailles Peace Treaty and the steep compensation payments that it entailed as revenge by the victors and a glaring injustice. Hitler claimed that Communists, and Jews had surrendered German honor to a shameful peace.
In late summer 1938, Hitler threatened to unleash a European war unless the Sudetenland was ceded to Germany. In September 1938, the leaders of Britain, France, Italy, and Germany In what agreed to the German annexation of the Sudetenland in exchange for a pledge of peace from Hitler. The Czechoslovaks were not even invited to the conference.
On the 15th of March 1939, less than 6 months after the annexation of the Sudetenland, Nazi Germany invaded and occupied the Czech provinces of Bohemia and Moravia, in flagrant violation of the Munich Agreement. The same year, A
The Second World War started on the 1st of September 1939 with the invasion of Poland. The campaign in Poland ended on the 6th of October the same year with Germany and the Soviet Union dividing and annexing the whole of the country.
In May 1940, around 60 km west of Krakow, the Germans established Auschwitz concentration camp. During the Holocaust, Auschwitz was the only location where concentration camp prisoners received tattoos.
Anton Lechner, a coach-driver by profession, had arrived in Auschwitz in 1941 and he became a guard. His true reign of terror began when he became deputy head of the clothes’ storerooms which was storage facilities that became known as the “Kanada” warehouses because the prisoners saw them as the land of plenty.
The buildings were used to store the stolen belongings of deported prisoners, mostly murdered Jews.
Anton Lechner not only mistreated the prisoners working under his command, but often stole the belongings of murdered Jews. Anton Lechner remained in the camp until December 1944 or January 1945 when Soviet forces approached the Auschwitz concentration camp complex and the SS began evacuating Auschwitz and its subcamps. These forced marches of concentration camp prisoners became known as the death marches. The prisoners had to march over long distances under guard and in extremely harsh conditions.
After the end of the war, Anton Lechner was finally to face justice and pay for his crimes. He was tried at the Auschwitz Trial which began in November, 1947 and lasted one month.
On the 22nd of December, 1947, the Polish Supreme National Tribunal in Krakow sentenced Anton Lechner to life imprisonment. However his life imprisonment lasted only a few years as he was released in 1957.
Lechner was 67 years old when he died as a free man on the 14th of September 1975 in Eppingen, Germany
Disclaimer: All opinions and comments below are from members of the public and do not reflect the views of World History channel.
We do not accept promoting violence or hatred against individuals or groups based on attributes such as: race, nationality, religion, sex, gender, sexual orientation. World History has right to review the comments and delete them if they are deemed inappropriate. 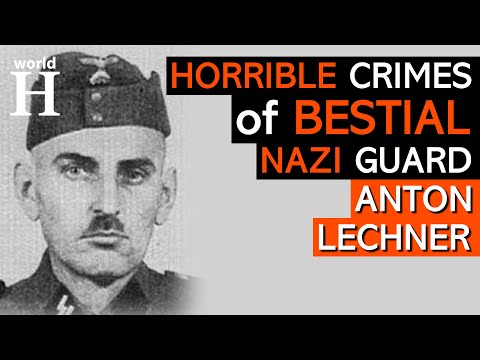